Meet our EDC-MixRisk scientists and learn more about the work they are doing. This time in the spotlight is Barbara Demeneix, Professor at the French National Museum of Natural History. She is an internationally recognized expert on thyroid function and endocrine disruption. In the EDC-MixRisk project, her group studies how chemical mixtures affect thyroid hormone signalling. She is also the work package leader of WP4 on identification of molecular initiating events. 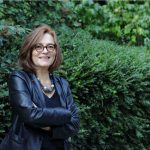 Hi Barbara – What are you and your research group studying in the project?

We also know that children who were born before universal screening for thyroid hormone at birth and who were not diagnosed as lacking thyroid hormone could become cretins. Such unfortunate children had very low IQs but also were small in height. This pathology was one of the first examples of the integrating role of thyroid hormone in coordinating growth and brain development, both before and after birth.

This is why we focus on the thyroid axis and how the maternal exposures found in EDC-MixRisk affect thyroid signalling. We use the frog tadpole because thyroid hormone has been conserved through 450 million years of evolution! It is exactly the same molecule in fish, amphibians, reptiles, birds, mammals – including us humans!

As tadpoles are virtually transparent, we could take the advantage of this feature in our research. We created a new line of tadpoles with a fluorescent protein under the control of thyroid-responsive gene. These tadpoles change their light emission (fluorescence) up if there is a problem with thyroid hormone signalling, making screening of chemicals and mixtures faster and easier.

In the beginning of the project, epidemiological data from the Swedish SELMA pregnancy cohort was used to establish relevant mixtures to be tested in the various animal and cell models and to address the three health domains (neurodevelopment, metabolism and growth, and sexual development). Many of the chemicals that were identified both in the mixture associated with language delay and the mixture associated with low birth weight are known to affect thyroid hormone signalling. This is the case for some of the phthalates and perfluorinated compounds found in the low birth weight and language delay mixtures. Also triclosan (in the low birth weight mixture) is a well characterized thyroid hormone disruptor.

Both of the mixtures (low birth weight and language delay) significantly affected thyroid hormone signalling at environmentally relevant, human exposure levels! In addition, we showed that the mixtures affected expression of key genes in the brain and slowed down tadpole behaviour.

Importantly, researchers working on other (cell and animal) models within the project also showed that thyroid hormone dependent genes were modified after exposure to the mixtures. This further strengthens the generalizability of our results.

We consider that thyroid signalling during early pregnancy is particularly vulnerable to endocrine disruption and can affect both brain development and birth weight.

We have found that the mixtures are harmful at the levels found in mothers of the SELMA study. So some of these substances should be clearly banned from the market. Also, the combined exposures and mixture effects should be better considered in regulatory arenas.

In this sense, the implications of our findings are very much linked to the project’s expected outcomes in the end. We want to first, assess risk and second, be able to recommend new approaches as well as policy proposals for decision-makers and regulators in Europe to improve the current situation.